On the 28th of July 2020, I announced on Twitter that I was creating a community for women Laravel developers called Larabelles. 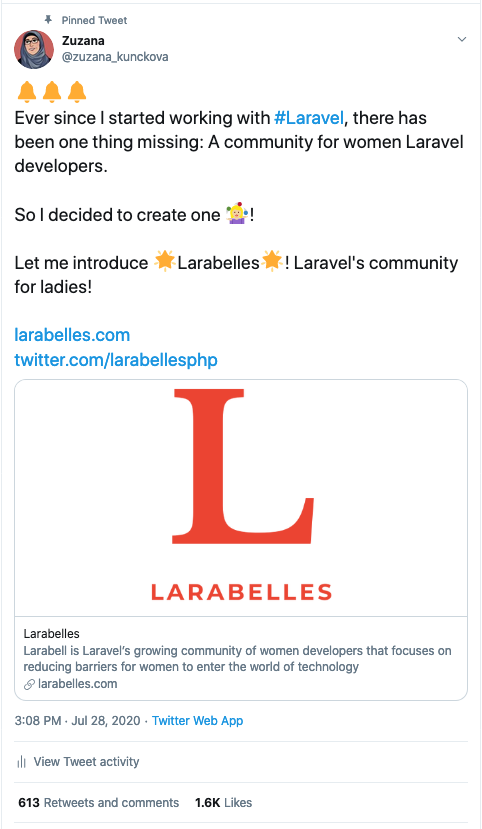 The response I got was completely unexpected but extremely positive. A lot of people expressed support and recognised the value in Larabelles and what it has to offer to the folks under-represented due to their gender.

Larabelles is a community that focuses on reducing barriers for women, non-binary and trans people to enter the world of technology. We do this by encouraging more folks to consider a career in tech and by providing a safe space to feel welcome and supported, not just at the beginning of their development career, but throughout.

Some people questioned the need for yet another group and wondered if by creating a group for women and anyone who identifies as one I am creating an even greater division within the community. To these people I say: I hear you. I understand what you are saying, and I hope to show you that by providing support and a platform for the under-represented folks, Larabelles will enrich the general Laravel (and tech in general) community, not segregate it.

I am going to write a whole post about gender inequality in the tech industry, and why it is harder for women to be heard and succeed. Not impossible, just harder. I feel some people don't realise how unequal the state of the tech industry is, maybe because they work at a diverse company and assume that this is the way it is everywhere, or maybe because they simply haven't had a chance to look into this issue.

I planned to launch Larabelles later in 2020. As I didn't expect the reaction I got, I am already feeling behind! I've had a lot of sponsorship offers, which I am so grateful for ❤️ , so I'm rushing to finalise the formal sponsorship options page as well as on a roadmap that will describe what Larabelles will actually do to help people. I'm planning mentorship sessions, first-time conference speakers support, pair-programming sessions, YouTube and Twitter accounts to amplify the voices of under-represented people within the Laravel community, and more!

I have also started changing the language I use when talking about Larabelles. Originally, I was talking about women and girls, but I realised that my language was not truly inclusive. I started using under-represented folks, or women, non-binary and trans folk instead, hoping to capture the spirit of Larabelles better.

I want to allow people to casually support me for doing this work, so I created a Ko-fi account. If you see value in Larabelles and would like to support me in building the community, please consider buying me a coffee! I'm also working on a more formal sponsorship program on a different platform that will help raise more funds for Larabelles operating budget; this is coming soon.

I know a lot of work needs to be done but honestly, I cannot wait to get started! It has been a long time coming.

Hope you'll join me on this journey and become a Larabelle or a Larabelles supporter!